Winter green soup is a soup your body will love! 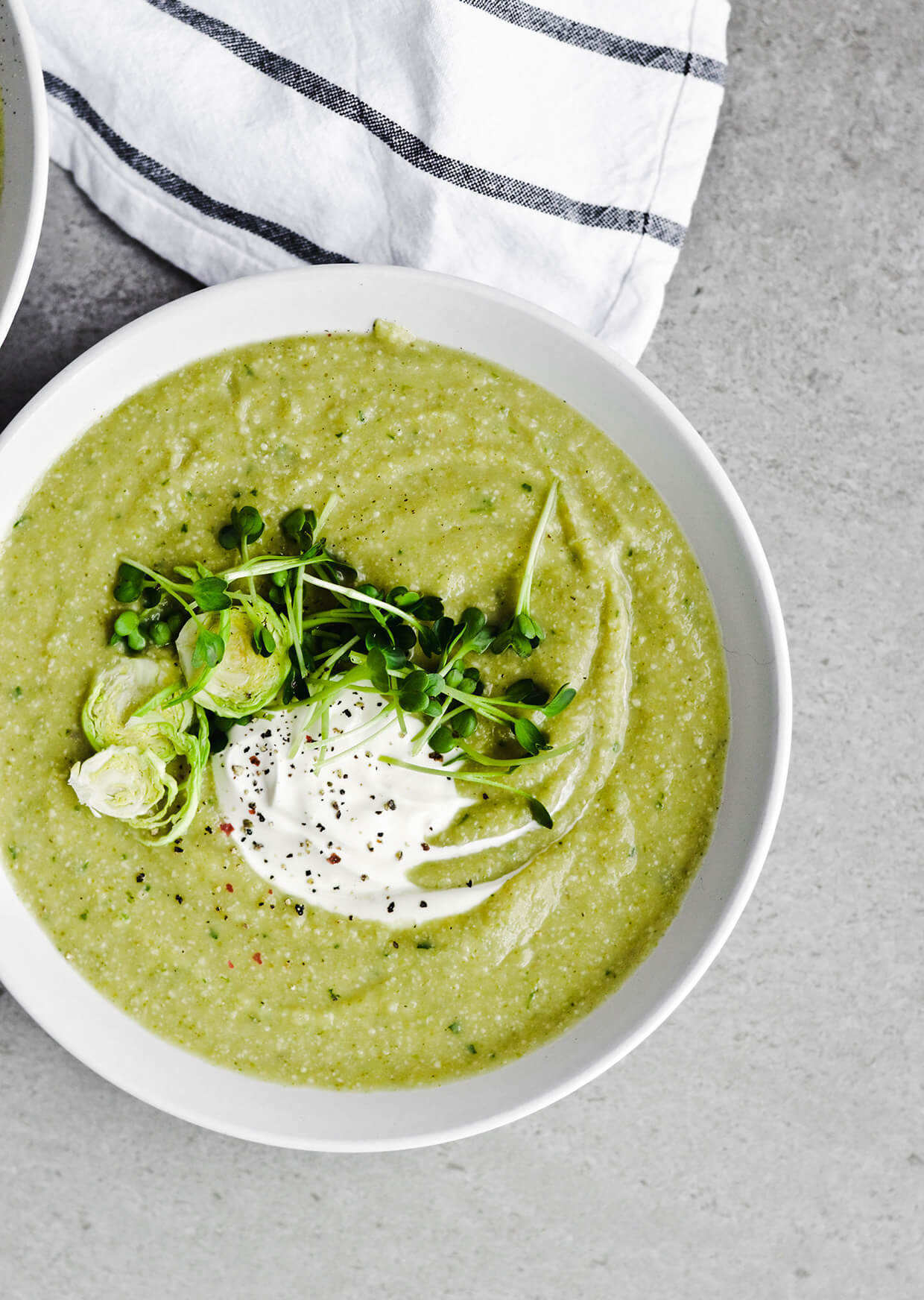 If some of you have been reading my blog for a while, then this soup might look familiar. If not then I’m glad you’re here… getting familiar with this soup. Because it’s such a jewel.

You know I’m not one to republish recipes, but I’ve tweaked this recipe since I first published it two years ago and I just have to share my new tricks. The original recipe came about completely spontaneously and so did the improvements. 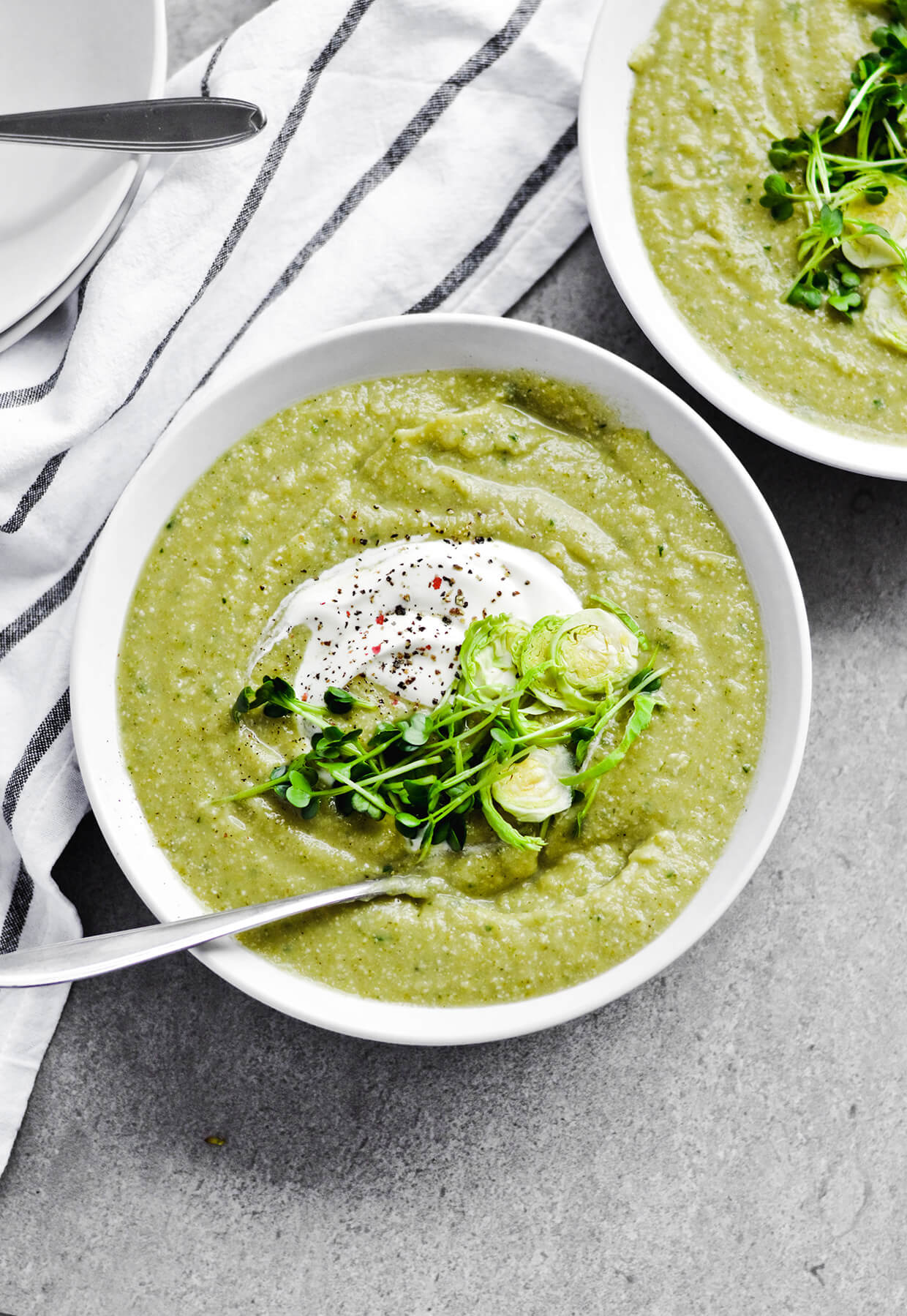 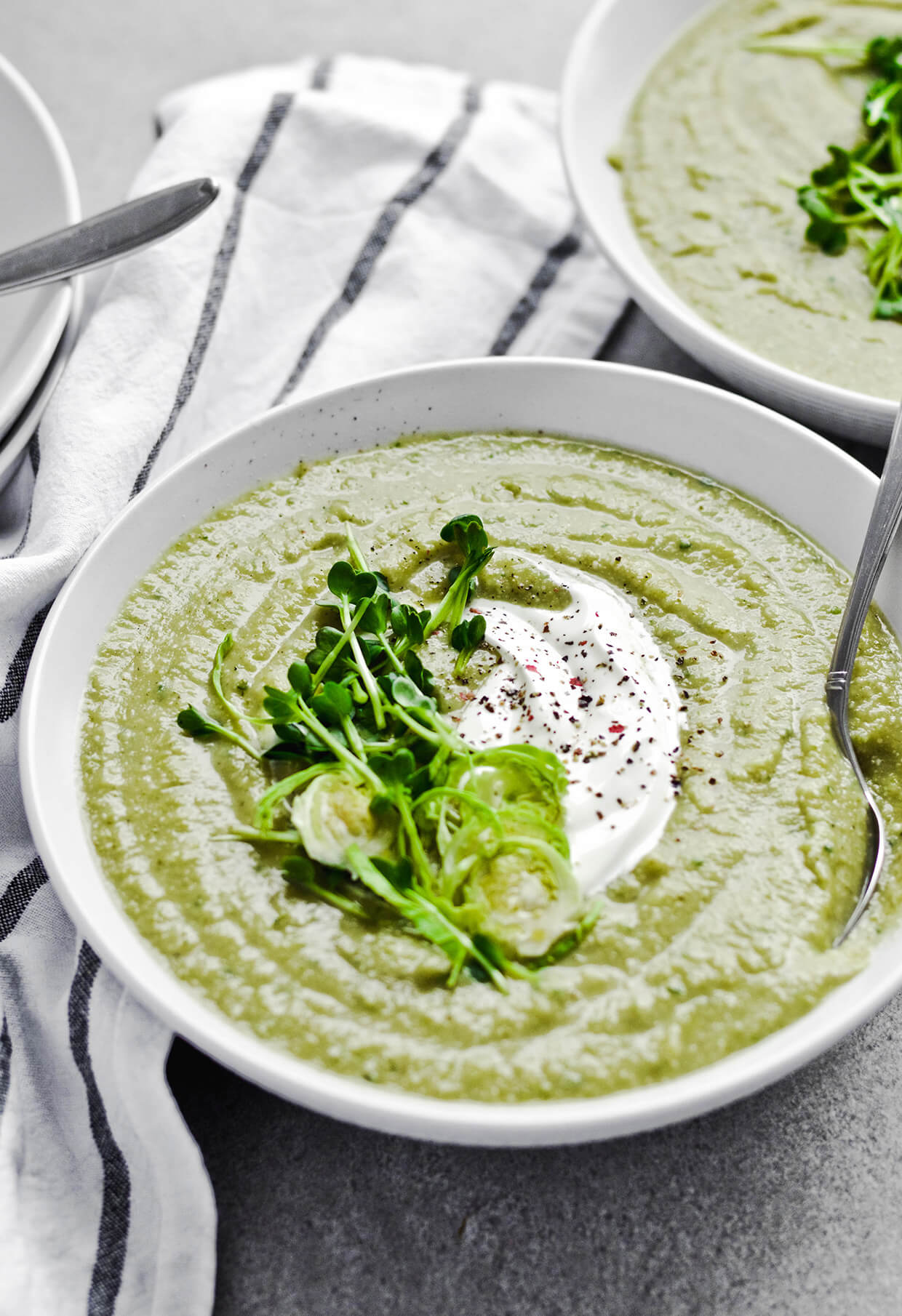 When I think about it, a lot of the things that are unplanned turn out to be pretty great. Spontaneous coffee dates, that new sweater you buy on the day you swore you won’t be shopping at all, a soup made of the vegetables currently in the fridge.

That happened with this winter green soup. It’s not that my fridge is insanely stocked because it’s not, but I often buy produce with a certain dish in mind and then end up making something else. Or sometimes I just buy vegetables that look really good and think about the dishes later at home. Do you do that too?

I try not to do that too often, meal-planning is more productive and less risky, but sometimes I am swayed by the beautiful vegetables. And while well planned-out recipes are very important, especially in baking, soups are very forgiving. They’re fairly easy to fix and have things added to them. There are really so many combinations one can try and still make a darn good vegetable soup. 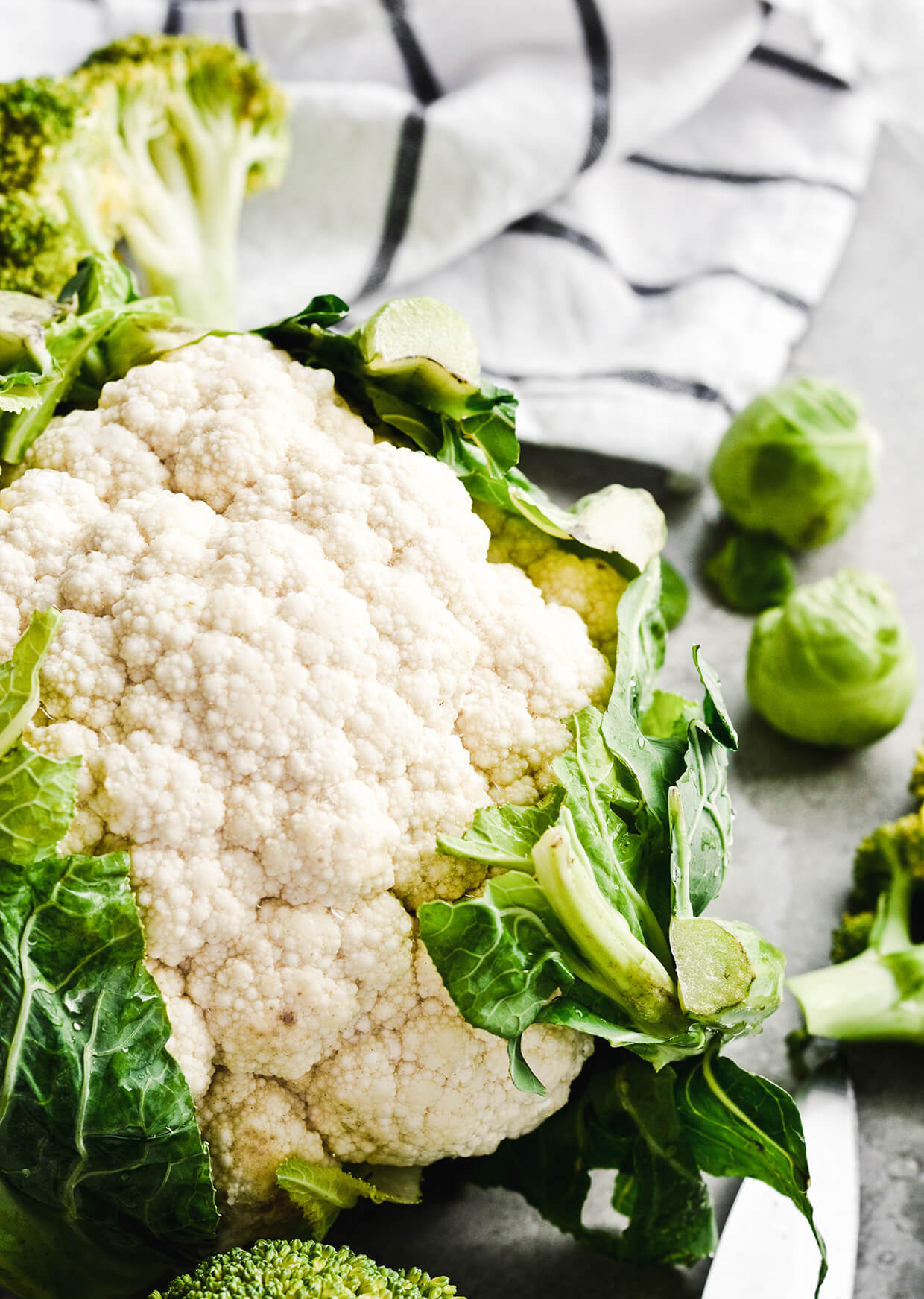 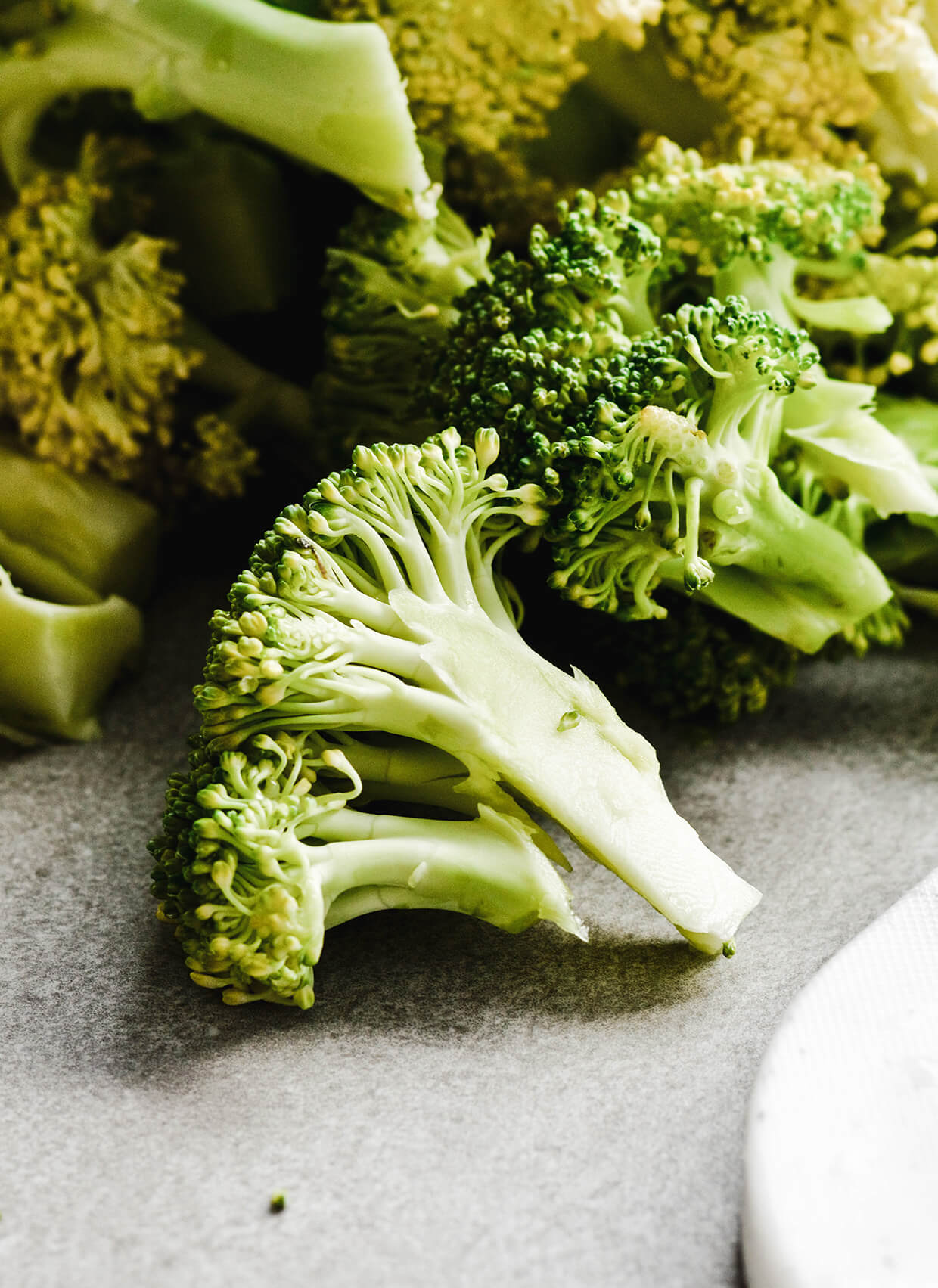 When I first made this green soup, my goal was just to keep it green and only include vegetables I like on their own too. The second time I added a small not-so-green cauliflower for some bulk. The third time I added a bigger cauliflower, which resulted in a heartier soup.

For a long time I kept making it like this, until I one day added cauliflower and broccoli stalks too. Because why not? Throwing those away seems like such a shame. Of course a lot depends on a particular batch of vegetables, so if the stalks don’t look good I don’t use them, but more often than not the florets I use in the soup are super-sized because I don’t remove the stalks. 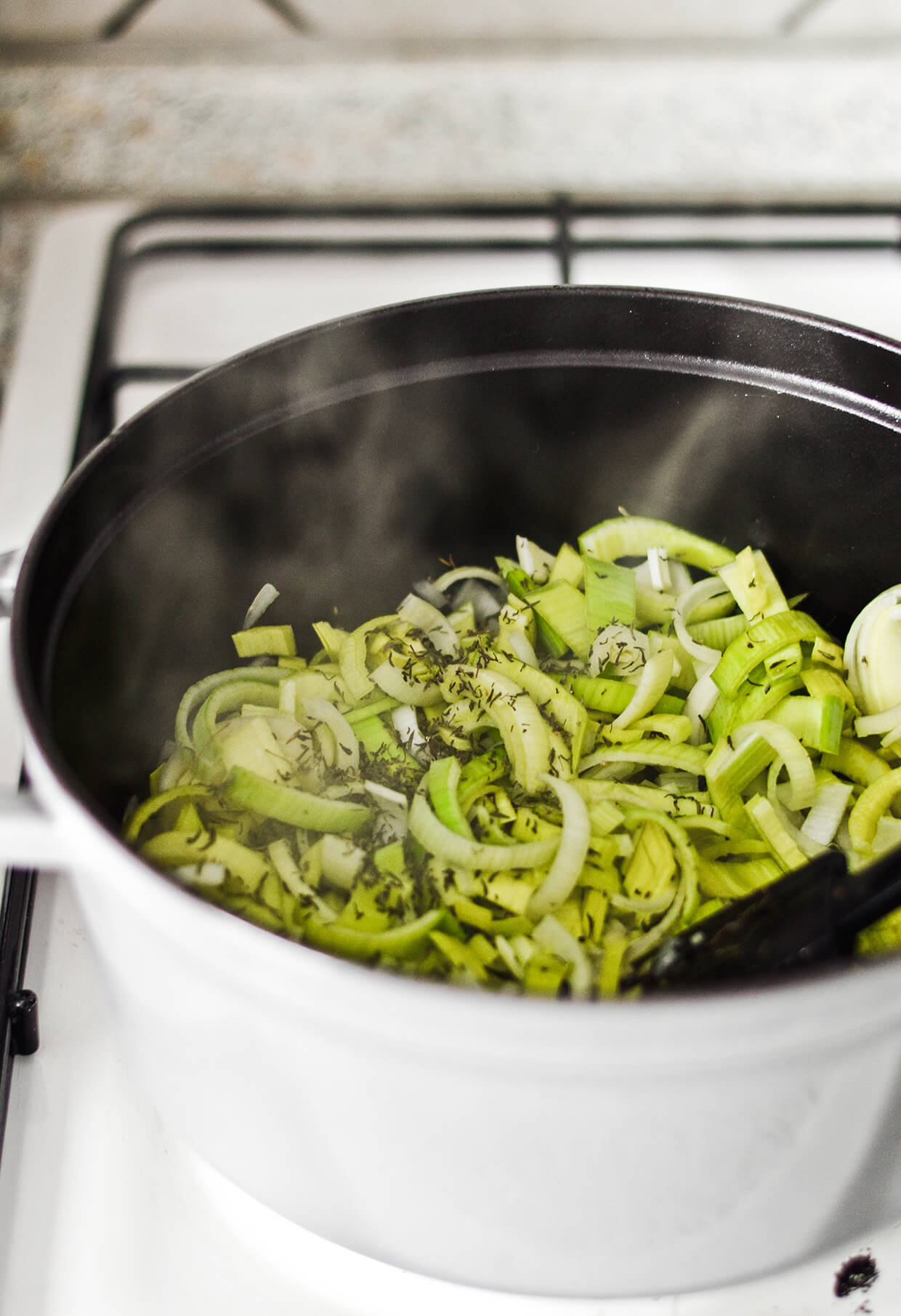 This winter green soup is made with all the winter vegetable jewels – brussels sprouts, cauliflower, broccoli, leeks. Understandably, there’s some chopping involved, but the good thing is that you don’t have to be very precise because you’re pureeing the soup anyway. Isn’t that fun?

The smaller the pieces, the faster they cook, and it’s good if they’re all cut equally, but no one is grading you on this and the soup will cook anyway. 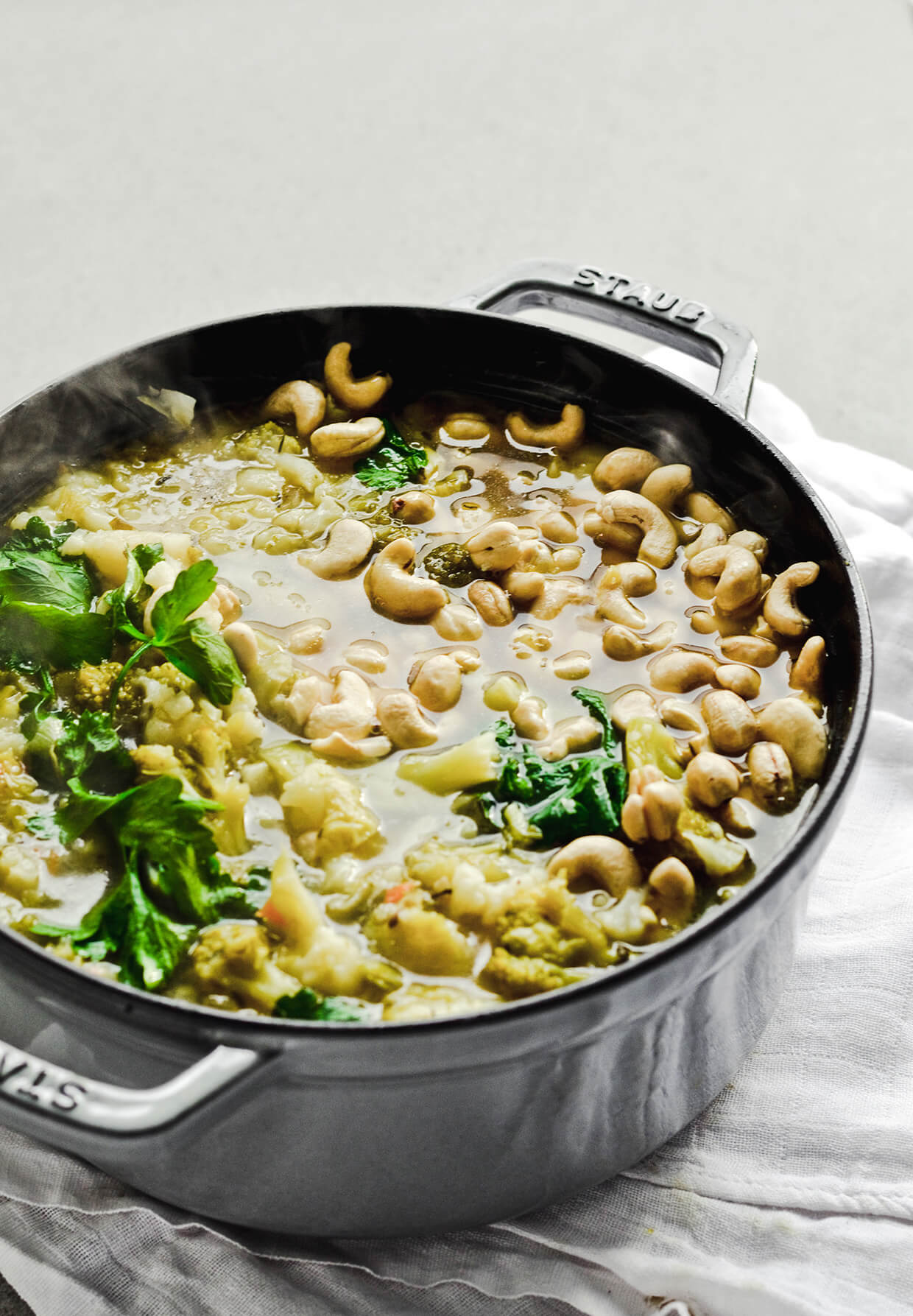 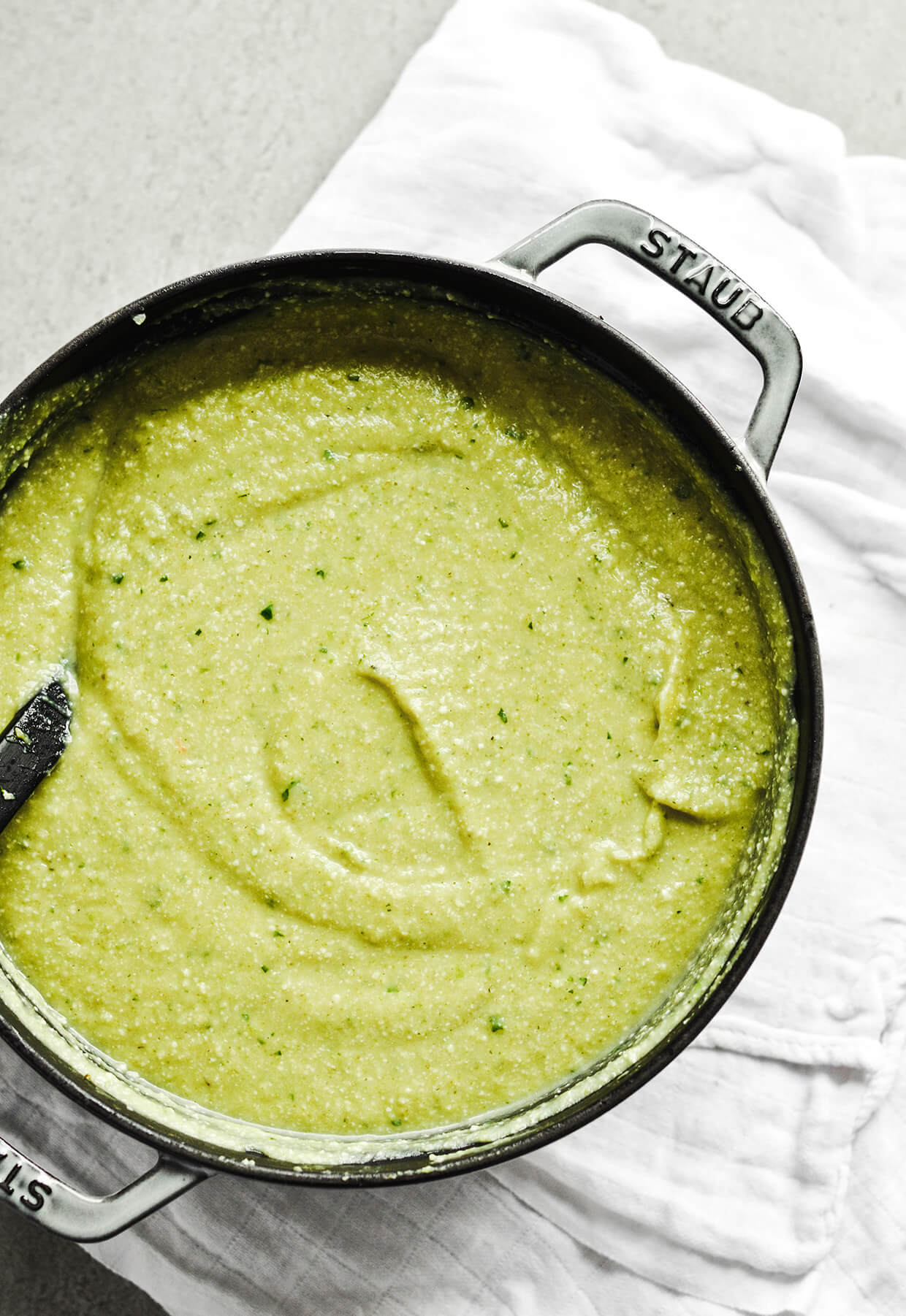 The biggest change I’ve made is that I now add cashews to the soup. I avoided nuts in soups for the longest time and I really never knew why. Until I had a bag that needed to be used and so I threw it in. And what a difference it made!!

Okay so the cashews take the soup from zero calories to probably like 5, but they make this already creamy soup really creamy and hearty. Of course the addition is completely optional, so you can always skip them, but if you’re not allergic to nuts I urge you to add them sometimes.

One thing is certain – you’ll leave the table feeling very good if you have this soup for lunch. Not just because you won’t be hungry anymore, but because you’ll know you ate something healthy. 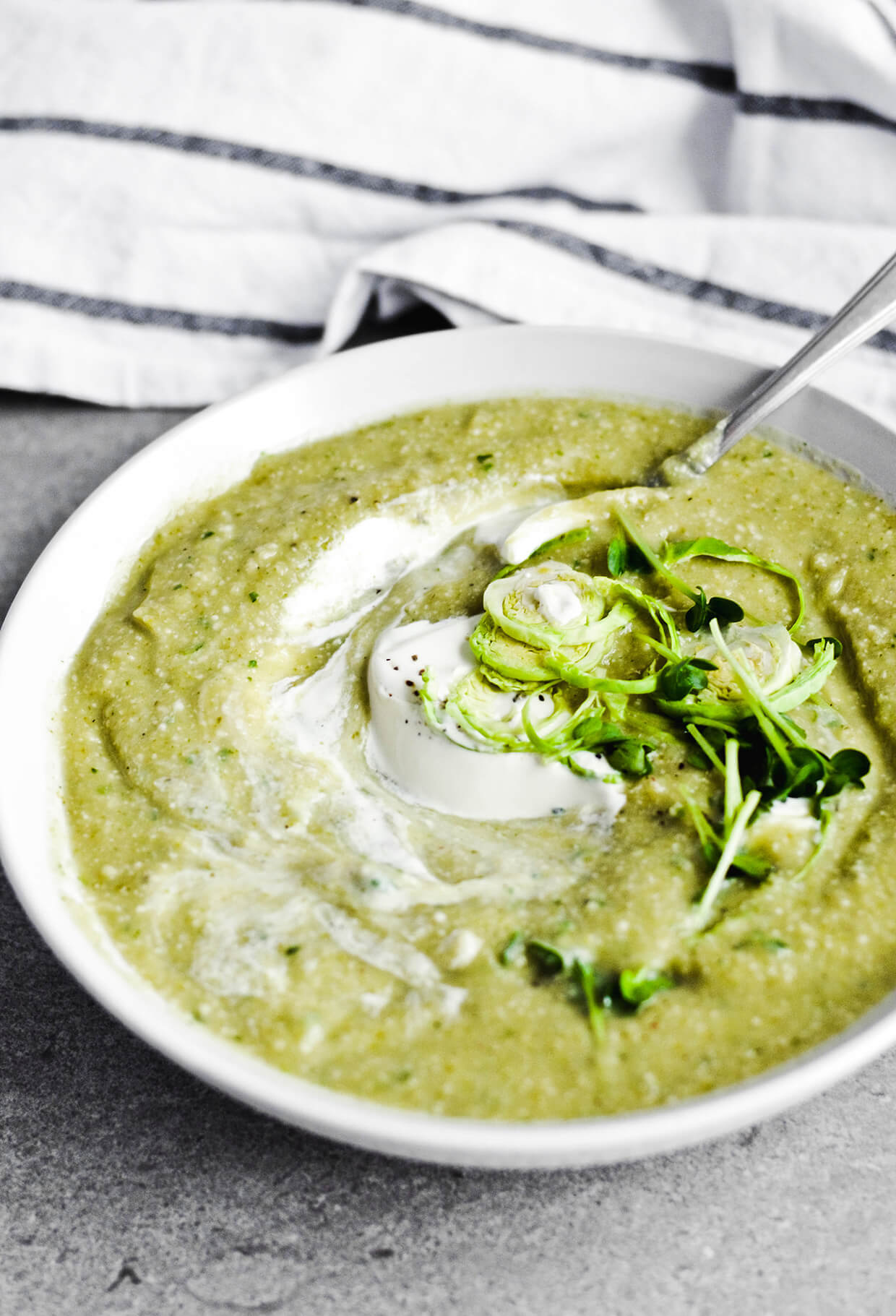 I like to eat this winter green soup with a small dollop of sour cream, as I feel that the sour cream is a nice contrast to the earthiness of the soup and gives it that extra kick. A crunchy addition of microgreens and thinly sliced raw brussels sprouts is spectacular as well. 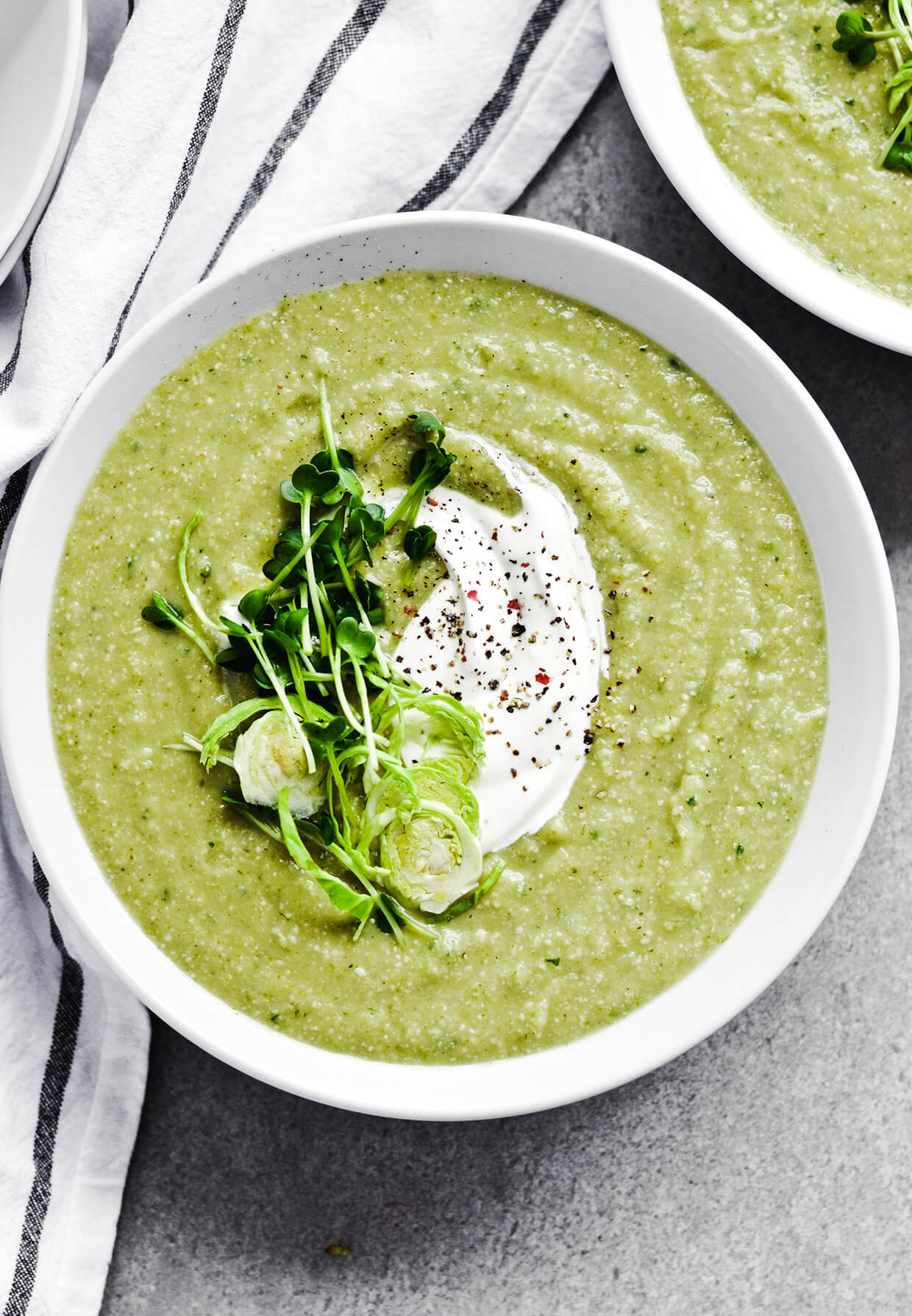 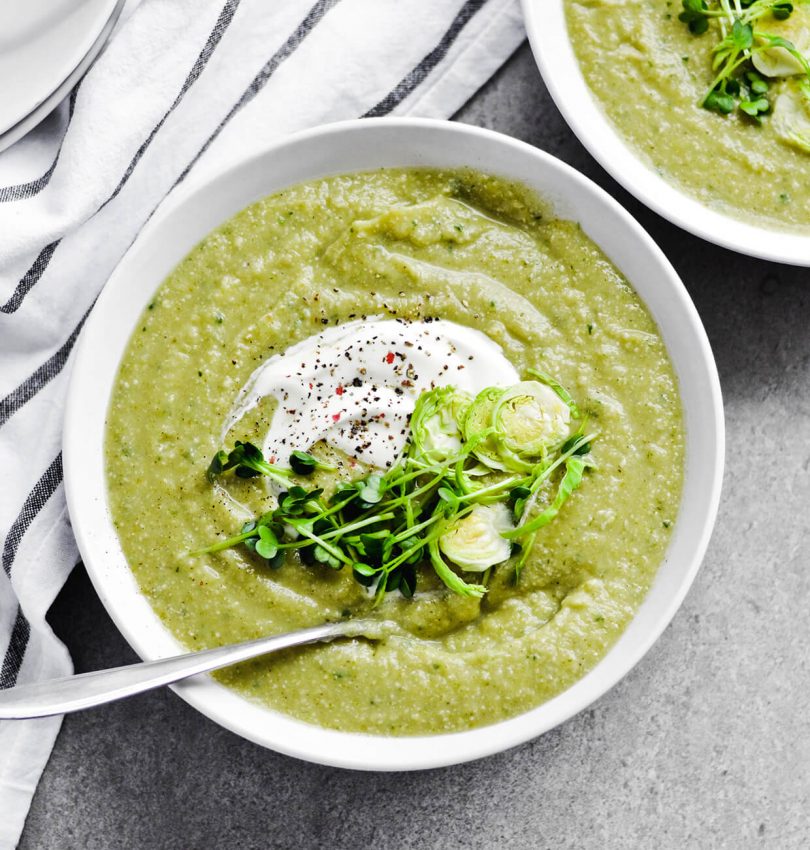 A low-carb soup packed with winter vegetables that is healthy and easy to make. Freezer-friendly too!

Use all the vegetables:
Because you are pureeing this soup, you can use parts of vegetables that you otherwise might not use if you were making a stir fry or similar. IF your cauliflower or broccoli have nice, fresh looking outer leaves chop them and throw them in the saucepan along with the florets. As you trim the cauliflower or broccoli stalks, only remove the very ends and any weird looking parts and chop up the rest for the soup. The stalks add a nice creamy texture to the soup.
Alternately, you can also chop the leaves and stalks and freeze them to use whenever you’re making vegetable stock.

Cashews are completely optional, but add such a creamy texture that you should definitely try adding them. If you’re not allergic!

Store leftover soup covered in the fridge for 1-2 days or in the freezer for 2-3 months.

Recipe first published in February 2015; revised and republished with new photographs in January 2017.