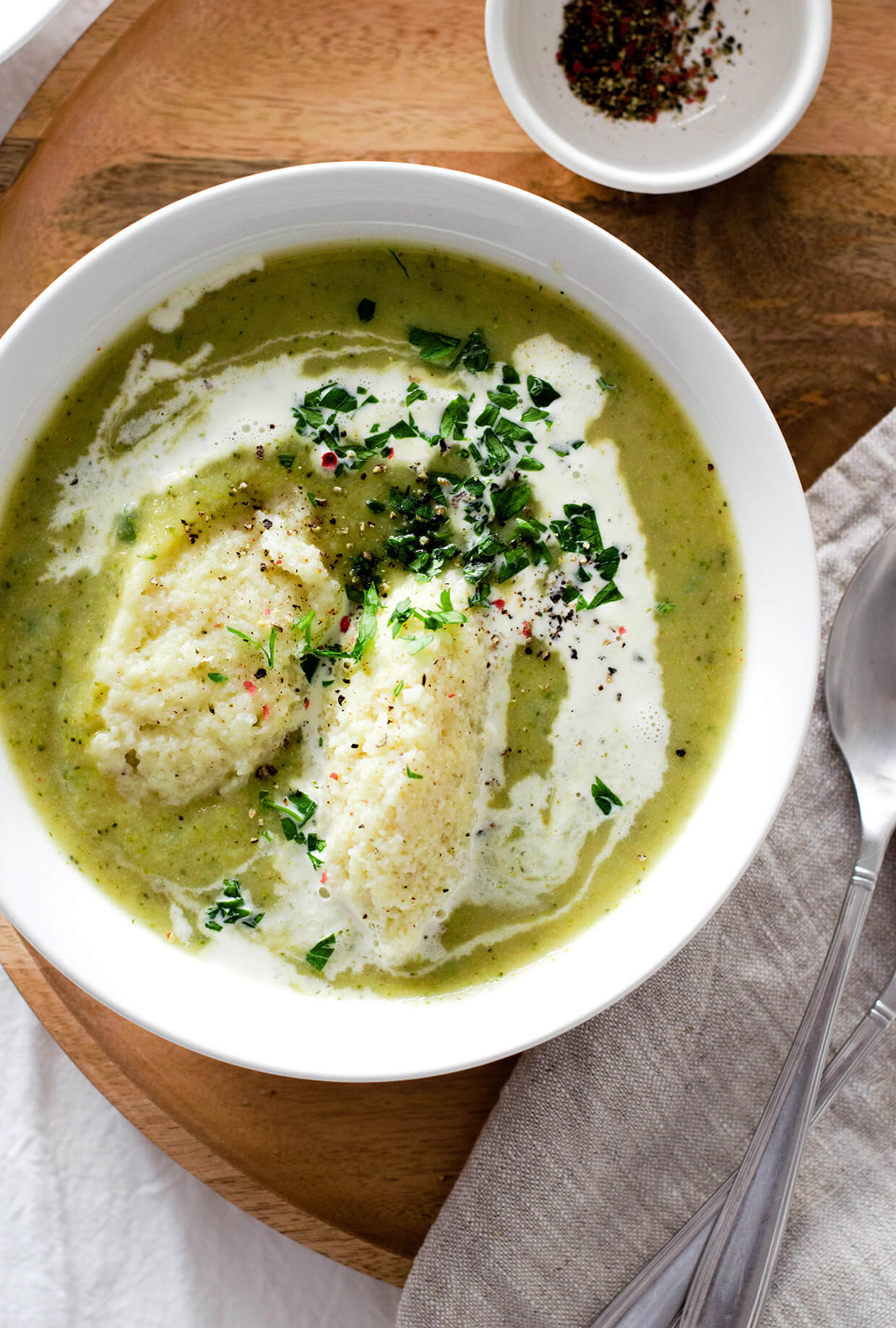 I am so happy soup season is here! Well, not that I really need an excuse to make or eat soup, but I just prefer it during the colder months.  When it’s windy or rainy outside and I get all tired and grumpy the one thing that makes me feel good and warm when I come home is a bowl of soup, like this vegan creamy broccoli soup with semolina dumplings. Such an easy thing to make, but such a great meal. 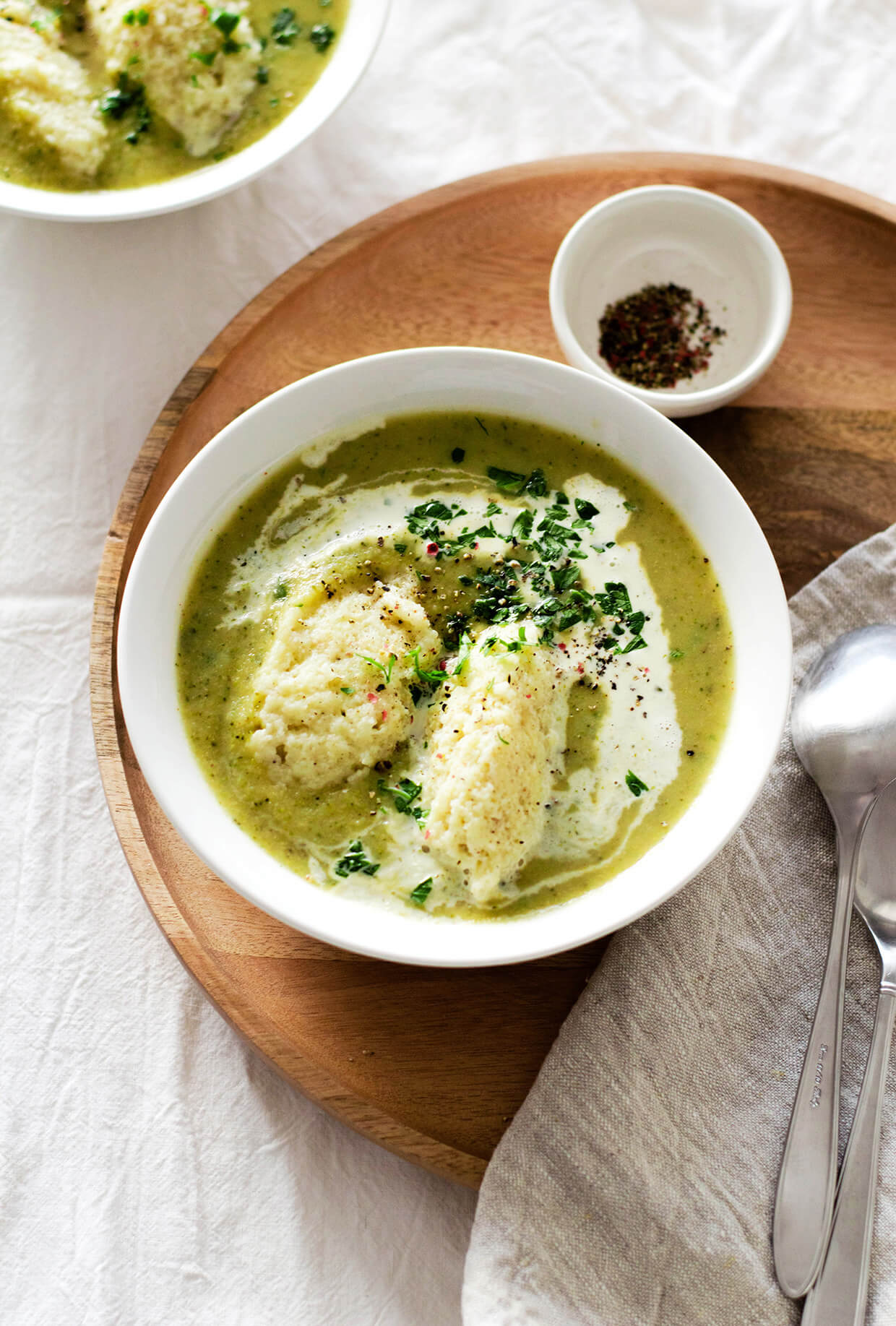 My mom always made a delicious vegetable soup (the other regular was beef broth soup), usually with carrots, peas, potatoes and cauliflower and then anything else she could find. And she always made a whole pot, so that we could store some for later.

I like to play with flavors and combinations more, but I learned all the basics from my mom. And that includes making extra soup for later, which I think is brilliant because it can save so much time. Once you pull out all the vegetables, chopping some extra seems like no work and the reward is great. 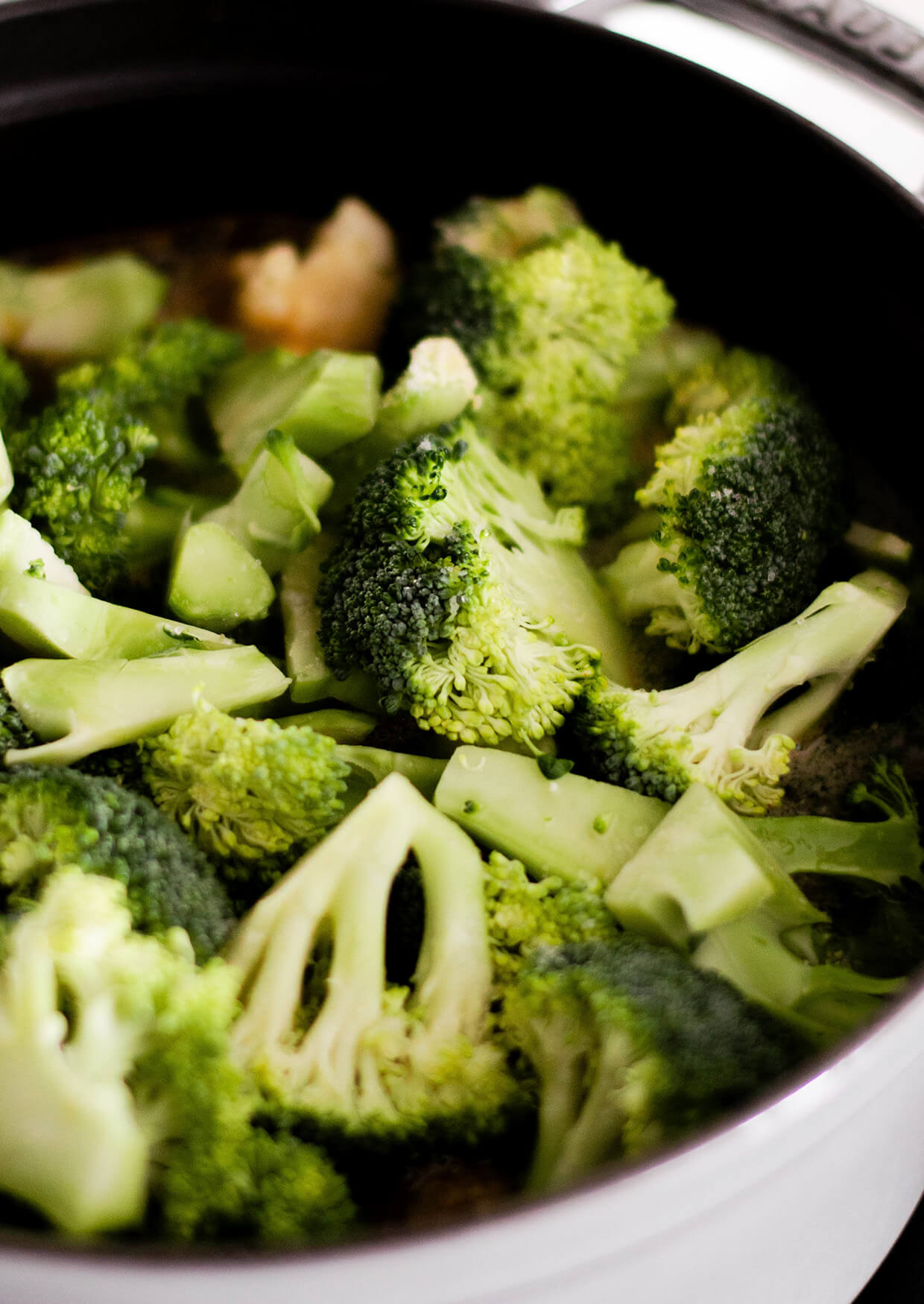 Anyway, this vegan creamy broccoli soup is really tasty. I love to make it with either cauliflower or potatoes, depending on what I have on hand.

I think potatoes and cauliflower are really interchangeable in (pureed) soups because they both give a nice, smooth texture without making the soup all about them. Because the cauliflower makes the soup bulky and creamy, you don’t even need to add any cream or cheese or milk. Of course I can’t help myself and I add a small splash of cream anyway, but the point is that this is totally optional!

While I usually just have a slice of bread with soup, I went for dumplings this time. Semolina dumplings are something my mom always put in her beef broth soup (the Slovenian term is goveja juha). They are typical for Slovenia and are usually served in clear, stock soups.

I think my mom got her recipe from her mom, and my grandmother got it from hers, and so on. I remember being young and making the dumplings with my mom and her method was always very simple. She mixed 1-2 eggs with a pinch of salt and kept adding semolina until she got the right consistency. Once the batter seemed thick enough, she waited for it to plump up and then she just quickly made dumplings by using two spoons. It looked SO easy!

Now, you’ll notice that the dumpling recipe I’m sharing here today is a bit different. Why fix something that isn’t broken, right?

This isn’t really a case of me fixing anything, but I have an old Slovenian cookbook at home that includes this dumpling recipe too, so I just had to try it out. While semolina dumplings are pretty traditional it’s only natural that people adapt them to their own taste. In this case the recipe adds butter and nutmeg, but while doing some research online I found that oil is often a substitute for butter. The butter and nutmeg really add some extra flavor and heartiness to the dumplings, so this is now my go-to recipe.

A little note on semolina:

You’ll notice that I list both semolina and cream of wheat in my dumpling recipe. According to the internet they’re not exactly one and the same, and what the product is called differs a bit depending on where you live. For example, we call it “griess” over here (if you’re familiar with German recipes you’ve probably heard of this before)… really, what I’m using is the pale (almost) white type of semolina, also used to make hot cereal (cream of wheat), and that is what you should look for when getting your groceries.

A different type of semolina is used for making pasta, that one is yellow in color and grittier.

Okay, now that we are done with that… let me just tell you you need to make this vegan creamy broccoli soup. It’s SO good and so simple, you won’t be sorry. The semolina dumplings make this a very hearty meal and any leftover soup makes THE BEST lunch a day or two later.

If the soup is too thick for you, thin it out with water, cream or milk (plant milk works too).

My favorite pot to cook this in is the 4-quart Staub cocotte. I like this one because the lid is heavy and doesn’t move during cooking. But any large pot works, as long as its volume is about 4 liters (4 quarts) or more.