If there’s one thing that I need to bake during the autumn and winter months it’s apple pie. There’s just no way around it. It’s Slovenian apple pie, to be more specific, although I’ll take anything with apples, including strudel and muffins and most definitely apple sauce.

I usually eat apple sauce with a spoon straight out of a jar. That’s probably the best way anyway. Do any of you do that too? 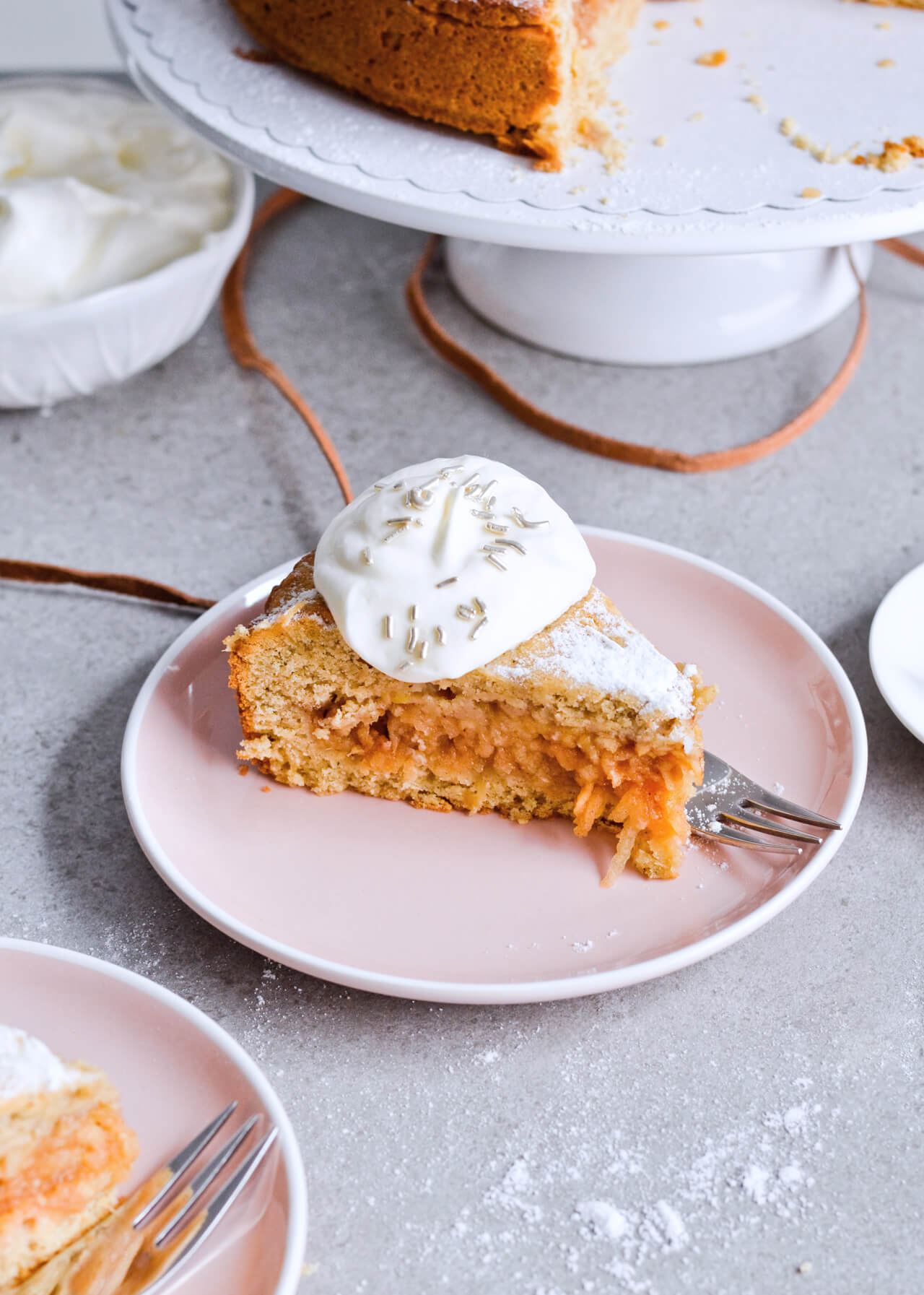 Before I jump into the recipe, I need to tell you that it’s not new. This post is an updated version of my original post from 2014, but at the end of the day those are just dates… the pie is as good as ever.

As the name suggests this is a Slovenian apple pie and it’s very different from what most of you probably think of when you think of apple pie. It’s the kind of apple pie we eat around here. 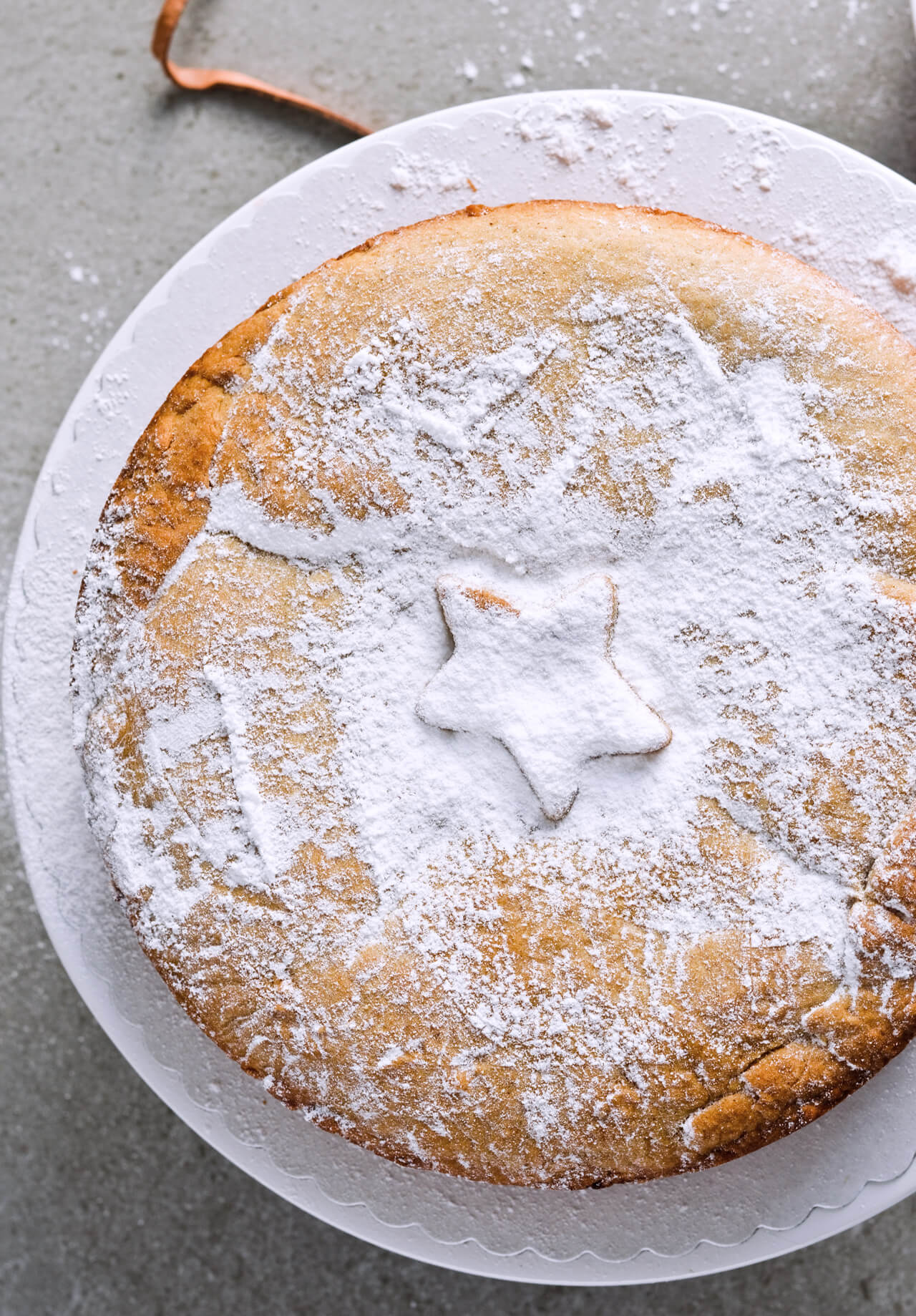 In an old German book I have, a variation of it is called Steyrischer Apfelkuchen, which is a type of apple pie made in Styria, a region both in Slovenia and in Austria, so this is another one of those foods we have in common.

Which is to be expected, after all, we did belong to the same countries at some point in history – there was the Habsburg Monarchy, which later became the Austrian Empire, followed by the Austro-Hungarian Empire; all placing Slovenia and Austria within the same borders.

So, it makes sense that we eat similar things, right?

History lesson over. Let’s call this Slovenian apple pie the cousin of the Steyrischer Apfelkuchen, because while the recipes people use vary slightly, the finished product is always very similar.

The dough of this pie is made with baking powder, egg yolks and sour cream, which is different from the typical butter crust. The end result is a crumbly, soft crust that almost tastes like a cookie. I love this crust because it’s so forgiving. You only have to roll it slightly, then just push it into the pan. And if you tear it, you just patch it back together and it’ll still bake beautifully.

The filling is made with grated apples, which again is very different from a typical American apple pie. These grated apples are tossed with come sugar, cinnamon, lemon zest and a tiny bit of breadcrumbs. The latter soak up some of the juices.

The top crust can be whatever you want. Some people just scatter bits of dough all over, some make a lattice crust and some do what I did. I just roll out the dough and cover the pie with it.

My favorite thing about this Slovenian apple pie is that it’s so easy to cut and it keeps for days. Because the filling is made with grated apples, they stick together when you cut the pie so you can get perfect cake-like pieces.

In reality, this pie is as much a pie as it is an apple cake and it is definitely a favorite in our home. I adore the juicy filling and cookie-like crust, which gets softer as the days pass by and I end up eating the pie for breakfast. Oops.

The reason why my pie has a beige color is because I used vanilla bean powder instead of vanilla bean paste. If you use powder, whisk it into the flour and not into butter. If the dough tears, as you’re putting into the pan, simply pinch it back together. To make the star in the center, roll out the dough for top crust, cut out a star and set aside. Transfer dough to the cake pan, tuck it in and then top with the star cutout. This time, I used a mix of Gala and Granny Smith apples. I often make this with Golden Delicious, Jonagold and Idared apples too. If you’re using a very sour variety, add more sugar to the filling. Pan sizes: you can make this exact pie in a 20-cm | 8-inch square pan too. Double the recipe to make a larger rectangular pie. Pie keeps for up to 3 days, stored airtight in the fridge.