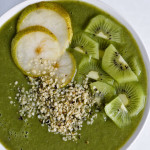 I started this week with a smoothie, I might as well end it with one. It’s not really a recipe I originally planned to share, but sometimes no matter how much I plan or what I write down as definite doesn’t end up that way. Because while I have many recipes I want to share, in the end I always follow my gut, literally.

The whether the past few days has been wet. That’s the best word to describe it. We got some rays of sunshine today which was a nice change to the otherwise gray and dark scenery. But it’s mostly been raining, which I actually don’t mind at all. I would prefer snow for the time of the year we’re in, but still, rain isn’t bad. I love the smell after a rainfall and find it to be very comforting. Even as a child I loved to walk around after it had rained for a long period of time.