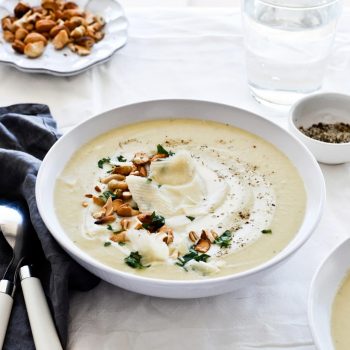 Easy and tasty soup.
Makes one large pot ( about 4L | 4qt ) of soup that serves up to 4 people comfortably. Can be reheated.

Make vegan
Use dairy-free cream (or coconut milk) instead of whipping cream and nutritional yeast flakes instead of parmesan cheese.

Instead of using an immersion blender, you can also puree the soup in a food processor. Do it in 2-3 batches and leave the tube hole open (so that the hot air can escape as you’re blending the soup).

How to toast cashews
On the stove:
Warm up a non-stick skillet on the stove, set over medium heat. Toss in the cashews and roast them like that, stirring occasionally, for a few minutes until they’re golden and brown and aromatic. Remove from heat.
In the oven:
Preheat oven to 180°C (356°F), line a baking pan with parchment and toss in the cashews, spread out in a single layer. Bake in the oven for 15-20 minutes or until golden brown and aromatic.

If you want to use the same amount of ingredients but make a bigger, thinner batch of soup, simply use more vegetable stock.